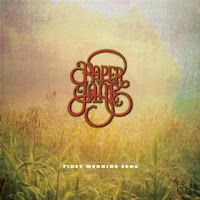 Melbourne four-piece Paper Jane are an interesting proposition. Though very much rooted in their local music scene, where all four members have performed for a number of years, together they create a sound ingrained with the spirit of Americana, and in lead vocalist Buck Edwards, they’ve a singer with a fabulously distinctive and rich voice. He’s the main songwriter, too, and he brings a freshness to the genre that simultaneously leans heavily on classic alt. country, ‘70s folk and country rock influences, and the Californian West Coast troubadour tradition.

The album opens with the title track, and it’s a delightful integration of soaring gospel, a pristine arrangement and an urbane, Tim Buckley-esque delivery. It’s damn near irresistible. “Say You Love Me Too” shows a gentler, more temperate side, though the musicianship is warm and inviting, as it is throughout, and Edwards tugs at the heartstrings without ever over emoting.

For a relatively new band, they ooze confidence, and are more than willing to try new approaches. On “Angels” they gathered their friends, plied them with alcohol, and christened them ‘The Green Ginger Wine Singers’. They can be heard throughout the track, affording tender backing vocals and bringing churchy resonance to the choruses.

If I were forced to choose a favourite, it would be “Jezebel”. Edwards’ vocal is just astounding; with Candy Edwards providing support, and the tension in the music builds beautifully. It’s over far too quickly, but that could be said for the album as a whole.

Fans of the Buckleys, Counting Crows and 16 Horsepower would be wise to keep a keen lookout for Paper Jane.
www.paperjanemusic.com
www.facebook.com/Paper-Jane
Phil S.