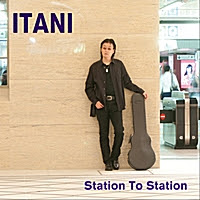 Nozomi Itani is a Japanese guitarist with a big reputation on the international progressive and jazz-fusion scenes. Certainly big enough to attract guest musicians of the stature of Tim Donahue (Paul Rodgers and various Dream Theater side projects), together with well-regarded Japanese players such as Masaaki Hiyama (ex-Casiopea) and Singo Otani (of infamous thrash metallers United).

His new album (his first since 2003’s “Between Shadow and Light”) bursts from the speakers in a flurry of notes and chords. Technical ability and power provide impetus and opening cut “Back On The Ground” is irresistible. If anything the pace and vigor increase on the following “Psycho-Logical”, where Itani and Otani’s guitars clash, and although they’re impossible to distinguish, there’s no denying the sheer dexterity of their playing or the sensations they inspire, akin to careering through a blizzard of lasers in a hall of mirrors – truly dazzling.

The title track soothes and calms, but Itani’s guitar remains needle sharp and eager to explore the margins, and when Donahue makes his appearance on “Leather Jacket”, the blast of regained energy is breathtaking. Though I’m sure “Station To Station” will primarily appeal to fans of jazz-fusion and hard prog, there’s no reason for the average rocker to feel any apprehension about dipping a toe in. Indeed, there’s an air of accessibility present through the album’s ten tracks that’s welcome, and should find Itani a larger audience than expected.
www.itanimusic.com
Phil S.