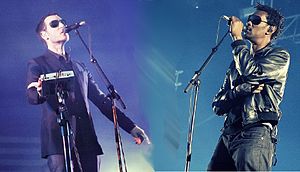 Massive Attack have teamed up with film-maker Adam Curtis to create a live show for the Manchester International Festival.

The event will use the band's music and Curtis' story-telling to form "a collective hallucination", Massive Attack's Robert Del Naja said.

The collaborators have released few details about what form the show will actually take.

Curtis, known for his experimental documentaries examining politics, media and manipulation, said the production would be "a musical entertainment about the power of illusion and the illusion of power".

At the 2009 festival, he staged It Felt Like A Kiss, an immersive theatrical experience with Punchdrunk and singer Damon Albarn that took over a disused five-storey office block.

Massive Attack, his collaborators this time, were revered by fans in the 1990s for their innovative and influential soundscapes that combined soul, dub and hip-hop.

Their new show will begin on 4 July, the opening night of the 18-day Manchester International Festival, which specialises in world premieres and one-off events from the worlds of music, theatre and art.

Other highlights will include Sir Kenneth Branagh performing in Macbeth in a deconsecrated church and Mercury Prize-winning band The xx playing 18 gigs to tiny crowds in a secret venue.