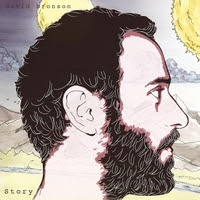 For seven years New York singer-songwriter-producer David Bronson has been working on “The Long Lost Story”, a 22-track autobiographical concept album, which was the result of, what must have been, a spectacular break-up. “Story” was released is 2012 and we’ve been promised the concluding part “The Long Lost” at some point in 2013.

Written and recorded over such a long period, most aspects of the trauma, together with their corresponding emotional responses are covered, but if you’re expecting a maudlin collection of self-pitying laments to lost love you’re in for nice surprise. Bronson’s a classic pop wordsmith, with one eye on the confessional singer-songwriter legacy of the early ‘70s, and the other on something far more immediate and upbeat.

Great songs come thick and fast: “The Turns” intricately lays him bare, and there are hints of both early Cat Stevens and James Taylor in his delivery, though musically, it varies from folky acoustic guitars, to epic electric rock. It’s a heady beginning, and it’s followed with some aplomb by “Times”, a feedback steeped rocker, with “Aladdin Sane” hooks and a swagger to its step. Of course it’s not all crash, bang, wallop, and of the more restrained material “Outside” requires special attention. It builds and expands in a most pleasing way, slowly revealing layers – together with an ethereal pedal steel guitar – and laying waste to any remaining resistance.
www.davidbronsonmusic.com
Tony S.