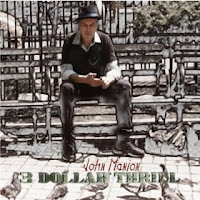 After 20 years working in Nashville, recording with the near-legendary Brad Jones and releasing a series of records, John Manion relocated to New York City in 2002, intending to leave music behind and settle into a corporate career. Needless to say things didn’t work out quite the way he planned.

He began to play open mic nights and parties, and before long he was writing new songs. The first results were released in 2008, the eight-track “Fireworks In The Rain” album, and perhaps unsurprisingly, his new songs reflected and related to his new life in the Big Apple.

Those themes are continued on “3 Dollar Thrill”, an enjoyable, upbeat collection, which offers a steady stream of standout songs. Musically he combines a host of American styles, from classic pop, to jazz, folk and country, a mix that sits comfortably in his hometown surroundings, especially when married to these particular songs.

The album begins with the lighthearted and brassy “If I Were a Pigeon”, a blithe imagining if ever there was, but a convenient vehicle to explore the city. “Gone” feels personal and tragic, a pensive analysis of a past injury, emotional or otherwise. It’s completed by an ambitious arrangement.

There’s no shortage of humour, from the anarchic “Email Mishap” to the folk-rock strummer “How Many People Can We Get On This Train”, but as clever as these songs are, he’s at his best when he’s a little more intense; on “How Do You See Me” he asks a question that most would avoid and the observational “Fruit Stand Man” is simply a joy.
www.myspace.com/jonmanion
Phil S.