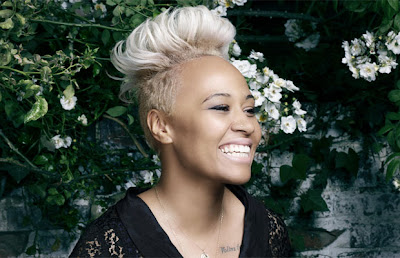 Singer Emeli Sande has capped a stellar rise over the past 12 months with four nominations for the 2013 Brit Awards.

The star, who had the best-selling album in the UK last year, is up for best female, best album and has two tracks in the best single category.

There were three nominations each for Mumford and Sons and Mercury Prize winners Alt-J.

Amy Winehouse has received a nomination for best British female after an album of material was released posthumously.

Singer Rita Ora also has three nominations, including two in the best single list, while Muse, Paloma Faith, Plan B and Olly Murs are up for two prizes each.

If Rihanna picks up the best international female prize at the ceremony on 20 February, it will be her third consecutive win.

Adele, who swept the board at last year's Brits, is in the running for best single for her James Bond theme Skyfall - meaning she has received Oscar and Brit nominations on the same day.

Sande's appearance on the shortlist comes 12 months after she was tipped as a rising star with the Brit Awards' Critics' Choice prize.

Her debut album, Our Version of Events, went on to sell 1.4 million copies in the UK last year and she performed at both the opening and closing ceremonies of the London 2012 Olympic Games.

"It's a really good feeling," she said of the Brits nominations. "It feels great, a bit scary, because you never know, you might not win anything.

Sande's two hits in the running for best single are Next To Me, which reached number two last February, and Beneath Your Beautiful, her chart-topping collaboration with producer-turned-frontman Labrinth.

She will compete for the best album award - billed as the most prestigious - with Plan B, Alt-J, Paloma Faith and Mumford And Sons.

Alt-J and Mumford And Sons are also up for best British group, a shortlist that also takes in stadium rock with Muse, teen pop with One Direction and atmospheric indie with The xx.

And in the best British female category, Winehouse and Sande are listed alongside Paloma Faith, Bat For Lashes and Jessie Ware.

Winehouse was eligible as a result of the album Lioness: Hidden Treasures, which compiled rare material, unreleased tracks and alternative recordings after her death in 2011.

The award for best live act has been reintroduced this year, and sees The Rolling Stones gain a nomination, 35 years after they were shortlisted for the first ever Brit Awards.

"It shows the broad spread of British pop music," said Alt-J's Gus Unger-Hamilton of the diverse shortlist. "That's what's great about the Brits."

The nominations were revealed by BBC Radio 1 breakfast show DJ Nick Grimshaw, who also had praise for the eclectic selection.

"It was really good to see Cat Power and Bat For Lashes but also have proper pop stars like One Direction and Rita Ora. And Calvin Harris, as well. I think he's made the best pop songs this year, so it's nice to see him."

At the launch, in London's Savoy Hotel on Thursday, Sande handed over this year's Critics' Choice prize to Sussex-born pianist and songwriter Tom Odell.

She told him to "enjoy it", saying the award was "a platform to let people know about his wonderful music".

Artist Damien Hirst has designed this year's statuette, adorning it with his trademark spot design. The awards will be handed out at London's O2 arena on 20 February.

The ceremony will be hosted by actor James Corden and will feature performances from Muse, Robbie Williams, Emeli Sande, Mumford and Sons, Ben Howard and One Direction.