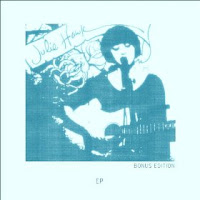 Raised in Ireland, and now based in the capital, singer-songwriter (and multi-instrumentalist) Julie Hawk emerged onto the unsigned London circuit last year, and has already secured a support slot with the acclaimed singer-songwriter Benjamin Francis Leftwich, as well as making her festival debut at Hop Farm. 2013 sees the launch of her BBC6 music lauded debut single, “The Value of Gold”, quickly followed by this release, a 6-track EP.

A pianist from an early age, Hawk learnt fiddle before eventually taking up the guitar, upon which she competently picks. Her childhood was spent singing and listening to a wide selection of different genres. These varied, early musical experiences colour her present style and sound, and she succeeds in creating a heady world that is her own.

Vocally she occupies a youthfully high register with a breathy delivery, which has drawn comparisons to Bjork and Joanna Newsom, though she’s not as musically unconventional as either of those two artists. Her sincere lyrics drift between light and elfin, dreamlike and mildly eccentric, through to the more desperate and pained.

From the outset the tone lifts slightly with each track, with “The West” being the (marginally) brightest point. The mood swiftly drops with the ash-scattering, mourning depression of “Cinders”, and then she makes a respectable cover of those esteemed kings of bedroom angst, The Smiths’ “This Charming Man” (the B-Side of the single), to end on a final, low note.
www.juliehawkmusic.com
www.facebook.com/JulieHawkMusic
Willsk