Review: The Great Um – What the People Want

The Great Um – What the People Want (Independent) 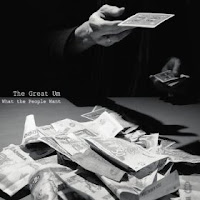 The Seattle indie-pop trio, The Great Um’s self-released debut, “What The People Want” may not necessarily be what the people want but its lightness of touch and general positivity maybe what some people want!

Their predominantly distortion-free sound has hints of Heartbreakers / Cars-style ‘70s new-wavishness about it, as well as a smidgeon of Razorlight and Vampire Weekend thrown in for good measure. Their largely upbeat and cheerful tunes - with whooped vocal interplay - suggests they’re a friendly bunch and attests to a strong camaraderie amongst their ranks.

The easygoing tone is broken only on "Sweet Baby K," which almost rocks with bluesy slide and progression, and the slow country-tinged ballad, “The Devil” closes on a more subdued note. Indeed, if bubbly, bright and optimistic is what you want then this is for you.
www.thegreatum.com
www.facebook.com/The-Great-Um
Willsk