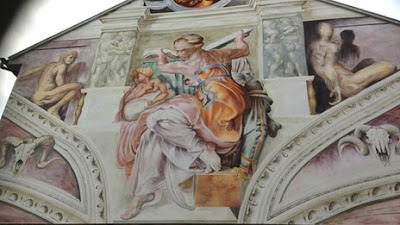 A fresco painted on the side of a Bedford coffee house using an ancient artform may "last for a thousand years", the shop's owner claims.

Part of Michelangelo's Libyan Sibyl has been recreated on the outside wall of Frescoes in Mill Street.

Artist Iain Carstairs used pigment paint on lime plaster, a technique dating back to about 1500 BC.

Shop owner Kevin Kavanagh, said: "The building will fall down before it fades."

He said the piece, copied from a work on the ceiling of Rome's Sistine Chapel, took three months and approximately £12,000 to complete.

He added he was "delighted" with the result.

"Painting on lime with pigment paint gives it longevity, which is why you can see works of art around the world which have lasted for hundreds of years," he said.

"The lime plaster mix that you put on first, you could hit it with a sledgehammer and it wouldn't break."

The Frescoes' owner, who describes himself as a "bit of an art lover", regularly displays pieces from local artists in his shop.

Local people contributed to the cost but most of it came from Mr Kavanagh's own pocket.

He said it was his way of "adding to the culture of the town".

"It's had a tremendous impact locally and really taken off," said Mr Kavanagh.

"People have been amazed to see the incredible work that has gone into it and the final result certainly has the wow factor."

Artist Mr Carstairs said: "I hadn't realised how tricky it would be but I am very happy with the result and want to do some more."