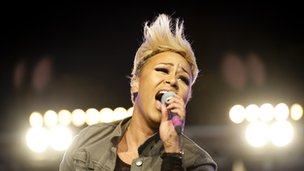 Overall UK album sales fell by 11.2% in 2012, according to the British Phonographic Industry (BPI).

The three best-selling albums last year were all by UK artists.

Emeli Sande's debut record Our Version of Events was the most successful with 1.4m copies sold, followed by Adele's 21 and Ed Sheeran's +.

Lana Del Rey's Born To Die came in fourth and One Direction's Take Me Home was at five.

"The domestic success of albums from Mumford and Sons and One Direction has been replicated abroad - both British acts have achieved massive success in the US."

It was also a fifth successive record year for British singles sales, which was up 6% to 188.6m with the vast majority - 99.6% - accounted for by digital downloads.

According to the Official Charts Company, music fans streamed audio tracks more than 3.7bn times, with Somebody That I Used To Know by Gotye featuring Kimbra and Call Me Maybe by Carly Rae Jepson the most streamed tracks of 2012.

BPI chief executive Geoff Taylor said despite a drop in overall album sales, it had been an encouraging year.

"The Jubilee celebrations and the London 2012 Olympics provided a great showcase for British music internationally, but market conditions at home remained difficult."

"However, the quality of our music and digital innovation by UK labels means we have excellent potential for domestic growth and to increase our share of the global music market."