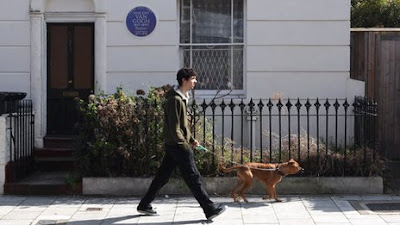 English Heritage says it is to stop its blue plaque scheme because government funding cuts had made it impossible for it to continue.

The organisation, due to celebrate 150 years of commemorative plaques in London in 2016, has had its funding cut by 34%.

Last year, English Heritage said it had had to cut back on installations.

The last shortlisted nominations will be put in place over the next two years, the organisation said.

The scheme sees commemorative plaques attached to residences in London that famous personalities have lived in.

The scheme, responsible for 869 plaques across London, is solely funded by the government.

A spokeswoman said it costs an average £965 per plaque.

She said that by reducing the team by two full-time equivalent posts and suspending installations, about £120,000 would be saved each year for two years.

A shortlist of "tens" of people agreed by the independent advisory panel will be worked through.

A plaque to be unveiled for architect John Nash in Great Russell Street next week will be among the last.

A spokeswoman said the decision to suspend installing plaques had been made before Christmas and new applicants were now being made aware.

She said it was hoped that by 2015 alternative funding could be secured or that another organisation could take over the scheme.

A statement read: "English Heritage remains committed to the Blue Plaques scheme that has done so much to inspire Londoners and visitors with the history of the capital and its inhabitants."

In light of 2010 government cut backs, English Heritage prioritised its planning advice services, the maintenance and conservation of its properties, existing grant commitments and its Buildings at Risk programme.

The plaque scheme was originally run by the Royal Society of Arts.

London County Council and then the Greater London Council ran it from 1901 to 1986 before it passed to English Heritage.