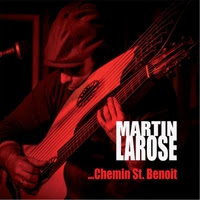 Martin Larose is a harp-guitar / acoustic guitar player from Quebec with a musical history that goes back two decades. He mixes and combines classic jazz and folk elements, and previous reviewers have favourably compared him to artists such as Michael Hedges, Leo Kottke, and even Eddie Van Halen. He’s certainly a talented musician, and there’s all the evidence you need for confirmation on his new long-player “Chemin St. Benoit”.

Featuring four cover tunes (two by the Beatles, one by The Police and another by Chris Whitley), Larose shows considerable subtlety – and no lack of taste – gently stamping his identity on familiar tracks like “While My Guitar Gently Weeps”, “Norwegian Wood (This Bird Has Flown)” and Sting’s “Wrapped Around Your Finger”. The fact that he uses the original arrangements as a base to build and explore structure and melody is an unexpected bonus. Indeed, the haunting, almost filmic quality of the latter Beatles’ track brings to mind both John Barry and Morricone.

Of his self-penned material, there’s much to be admired and enjoyed. Opener “Falco's Wild Run” is a jaunty, dexterous workout, and would charm the birds from the trees. “La Marche d'Alex” is graceful and delicate, with a lithe, muscular core, and “On My Way to Twickenham” conveys a sensation of motion in a most pleasing way, borrowing a little of Pete Townsend’s “Substitute” on the way. The Who were regulars at Eel Pie Island (in Twickenham), so maybe that’s the connection.
www.martinlarose.com
www.reverbnation.com/martinlarose
Tony S.