Rare colour photos of Beatles 1964 US tour for sale 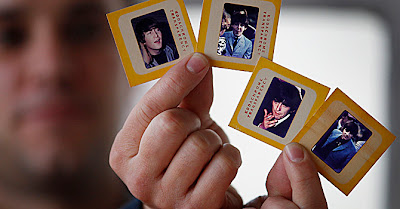 Unpublished colour photographs of The Beatles during their first tour of the US are to be auctioned.

The 65 slides include many stage shots, including George Harrison with his red Rickenbacker guitar, which appeared in the film A Hard Day's Night.

They were taken by award-winning physicist Dr Robert "Bob" Beck.

The band played a string of sell-out concerts in the US in August 1964 following an appearance on the Ed Sullivan show in February that year.

Dr Beck was a researcher and inventor who died in 2002, leaving a huge archive of photographs and slides in his Hollywood home.

After the huge success of the band in the US, colour photography and film of them was more widely used for their 1965 and 1966 appearances there.

The famous 1965 Shea Stadium show was filmed in colour by the BBC.

Ernie Sutton from the British Beatles Fan Club said: "These photographs show The Beatles during their 1964 US tour, both on and off-stage.

They will go under the hammer on 22 March, 50 years to the day in 1963 when the band released their first album, Please Please Me.

Auctioneer Paul Fairweather, of Omega Auctions in Stockport, Cheshire, said: "This is a fabulous collection, particularly given that all the slides are in colour."

The transparencies are to be sold along with the copyright and he estimated that they would fetch between £10,000 and £15,000.