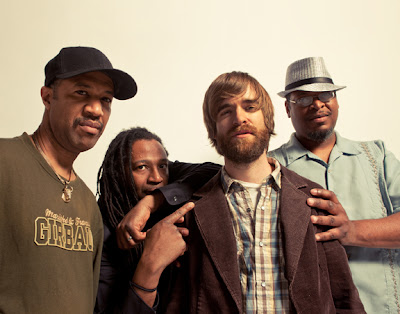 Nick and The Ovorols are preparing the release of their debut studio LP Telegraph Taboo this month - an album that finds the Chicago-based foursome injecting deep soul, spirited guitar-driven rock and even a bit of psychedelia into their heavy bedrock of electrified blues.

The group is lead by vocalist and guitarist Nick Peraino, a native New Englander who moved to Chicago in '98 to pursue studies in jazz guitar at DePaul University. A strong passion for blues music was a deciding factor in choosing to attend college in Chicago. Peraino toured extensively throughout the Midwest in 2003-2004 promoting his post-college roots-rock band Nick Peraino and Blue Moon Risin'. He also wrote and produced their debut album Noisy Picks and Humbars. In 2005 he began playing alongside local Chicago underground blues legend Joanna Connor. He continued to perform locally and tour nationally with The Joanna Connor Band where they played regularly scheduled shows at Chicago’s Buddy Guy's Legends, Kingston Mines and The House of Blues. In 2009 Peraino was personally invited by Grammy Award winning harmonica legend Sugar Blue to join a two week tour of Europe to perform in a number of showcase events.

In 2011 Peraino’s move from sideman to frontman was realized through a shift in consciousness, after a bad turn of events led to a positive outlook on life. An unfortunate visit to the emergency room in February of 2011 led to Peraino’s diagnosis of Crohn’s Disease. He came upon newfound confidence and a burning desire to become a band leader. Shortly after forming Nick and the Ovorols with guitarist Carlos Showers, bassist Vic Jackson and drummer Lance Lewis in the late summer of 2011 they held a five-month residency at Chicago's famed blues venue Kingston Mines. Kingston Mines MC Frank Pellegrino is calling Nick “one of the best young, up and coming talents.” Earlier this year the band decided to record one of their weekly Wednesday night shows and the album Live at Kingston Mines was born.