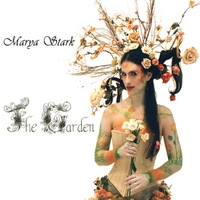 Originally from Arizona but now based in Santa Cruz, California, Marya Stark’s sunshine addiction isn’t wholly reflected on her debut album; a collection that’s deficient in neither dark passages nor poignant melodies. There’s no discernable lack of ambition either, and with co-producer Andy Zenzack she’s shaped an extraordinarily expansive record, which strikes out and develops from a multitude of stylistic bases, including (but not confined to) ethereal-indie, folk, pop, ambient and classical. That the results are accessible and cohesive throughout the album’s considerable duration (13 tracks / 50 minutes) is a credit to both Stark’s artistic vision and Zenzack’s interpretive skills behind a mixing desk.

The album sets out its musical stall from the off, beginning with the title track. It’s a faultless assimilation of so many different influences and methods, from string sections to folk guitars, and underpinned by spiritually intriguing lyrical flights. It’s delivered with a lightness of touch that would have passed for perfect pop before the big beat became all-conquering. It’s followed by the haunting, epic “Crossroads”. The song slowly unfolds over six-minutes, ebbing and flowing through an arrangement that finds room for string and wind instruments, complex neo-tribal drumming and a dazzling vocal from Stark. The first single is “Witness”, a merging of Eastern and Western classical styles, with Stark again in remarkably fine vocal fettle, either soaring above the melody or picking out and emphasizing various phrases.

Other artists and groups are evoked, from All About Eve and Cocteau Twins, to Alanis Morissette and even Enya, but “The Garden” never feels or sounds derivative or anything less than entirely original. Indeed, Stark displays all the attributes of a major new talent, and hopefully there will be plenty of others who agree.
www.facebook.com/maryastarkmusic
www.maryastark.bandcamp.com
Simon M.