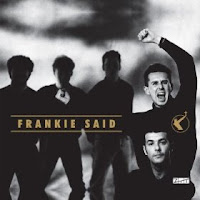 The sticker on the front cover proclaims “Eight singles, three #1s, classic album tracks and two of the biggest 12” singles of all time”. If there was any uncertainty as to the popularity of Frankie Goes To Hollywood at their poptastic mid-‘80s peak, that one sentence will surely dispel any doubts. They were huge, and everywhere; on radio (despite Mike Read’s best attempts to have them banned, castrated and shot), in clubs and on TV, and if you somehow managed to miss them, it was likely that your sister / mum / metrosexual best friend owned the t-shirt.

This particular collection (there have been others) is well worth investigating if you’ve yet to transfer your FGTH from analogue to digital. It contains all of the hits, though not necessarily in the standard format/mix, and a couple of rarities for the diehard fan. “Relax” comes twice (see what I did there – forget it), a promo-only 7” version and the ever-popular “New York” 12” cut. “Two Tribes” and “The Power Of Love” are equally well represented. Of the scarcer material, a previously unreleased version of “Watching The Wildlife” is a corker, and their cover of Springsteen’s “Born To Run” (recorded live on The Tube) will probably cause much pain and grief to the Brucettes, but for everyone else it sounds a-okay.
www.salvo-music.co.uk
Tony S.