Review: Affinitia – Do We Go Wrong? 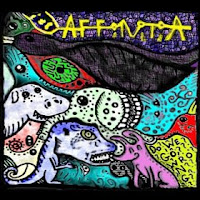 Tim Urlacher  (aka Affinitia) wrote his first song in second grade on green paper, the result of a crush on a classmate. Unfortunately for young Tim, his older sister found it and acted accordingly, just as all older sisters should when presented with such a prize. Needless to say, there was considerable embarrassment, but credit where it’s due, it may have taken a little while to recover his confidence, but he got back on the songwriting horse. This is the second Affinitia album I’ve had the pleasure to hear (and write about), though it preceded his latest recording “These Other Words” by a month or three. Both came out in 2012, and they play like a double album, which is hardly surprising as both albums were written over the course of several years.

Urlacher consistently writes songs that can’t be pinned down. I’m sure for the sake of filing systems, he’ll be conveniently ferreted away under “indie-folk”, but that’s far from the whole story. Names like Lou Barlow and Elliott Smith come to mind, as do groups such as Admiral Fallow and Dutch Uncles, and Urlacher’s pop instincts are always to the fore, providing the hooks that keep us listening. It’s worth taking the time to really hear his songs, too. Opening with the short but wonderfully sweet “Memorable Times”, which says so much, so well, in a minute and a half. “Allison” is beautifully realized love song, though so fragile and inevitably, unrequited. “Cloud of Smoke” is the longest track here; it’s a tension filled lo-fi epic, underpinned by a trebly strummed acoustic guitar, and all the hurt Urlacher can channel.
www.affinitiamusic.com
www.facebook.com/Affinitia
www.youtube.com/DoWeGoWrong
Phil S.