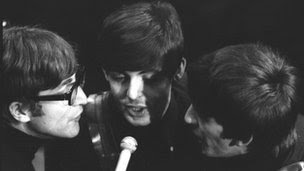 Mick Hucknall and The Stereophonics are among artists attempting to re-record The Beatles' Please Please Me at Abbey Road on the album's 50th anniversary.

The musicians will have just 12 hours to complete the work, mirroring the marathon single session that resulted in the Beatles' debut album.

They will use the same studio, with all the tracks recorded in order.

The event, which takes place on 11 February, will be broadcast live on BBC Radio 2.

It will also be filmed for a BBC Four special called 12 Hours to Please Me, which will be screened on 15 February.

The event is to be hosted by Stuart Maconie and Jo Whiley, who will be joined by guests from the original session 50 years ago, including engineer Richard Langham and Beatles press officer Tony Barrow.

The show forms the centrepiece of a series called The Golden Age Of The Album - a two-week celebration across BBC Four, Radio 2 and 6 Music.

Richard Klein, controller of BBC Four, said: "I'm thrilled to be celebrating The Golden Age Of The Album across both television and radio.

"We're taking a look behind the scenes of a really exciting moment in popular music history when some of our most iconic albums were recorded, and trying to discover what are the essential ingredients that make an album great."

Leicester Bangs Comment:
In 1962 The Beatles were a young, well-rehearsed band, full of vim and energy – and quite possibly amphetamines. If the need is felt to recreate the 12-hour recording session for their debut album, why not employ hungry, new, young bands, rather than a bunch of dreadful, tired old has-beens like Mick Hucknall and The Stereophonics. Rubbish.