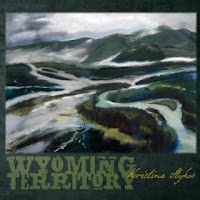 There’s a biography on Kristina Stykos’ website that’s both informative and genuinely interesting. Her New York roots in an around the folk boom, the music and parties, and her own stage debut in 1976 when a student in Cambridge, Ma. conjure up a back story that’s rich in life experience. Her move to Vermont, early recordings, a family life and her work with Live Art, an organization that promotes folk music in her adopted state, all add to the legend and provide plenty of insight into Stykos’ approach to her songs and music.

Her new album “Wyoming Territory” was inspired by travel and exploration, but it’s no tourist guide. Instead Stykos transports the listener to the mountainous Western state via a series of story songs, and abstract narratives. The results are consistently engaging, and quite often enthralling. Songwriters from Neil Young and Buffy Sainte-Marie to Lucinda Williams and Mary Gauthier are evoked, and it’s an album you’ll want to cozy up to, close your eyes and sink into. The musicianship and production both play their part, and that’s all down to Stykos, who produces, and her band of local players, including the much-acclaimed Bow Thayer.

The album opens with the languid guitars of “Watershed”; a short introduction before the song captures our attention. It’s an exceptional track and features a wonderful dark, moody solo from what I think may be a viola, though I’m not altogether certain. “Jeffrey Lee” rolls along in a most agreeable way, not unlike a late-period Grateful Dead track, and there’s plenty of space provided for Stykos to tell her tale.

Of the dozen tracks only a smattering don’t make four minutes, and just as many break the five-minute mark. It gives the collection an epic, larger-than-life quality, and the longest track comes right at the end, the ambitious “Forgiveness” is beautifully paced, packed with emotion, and wraps up this excellent collection on a huge high.
http://www.kristinastykos.com/index/
http://kristinastykos.bandcamp.com/album/wyoming-territory
Phil S.