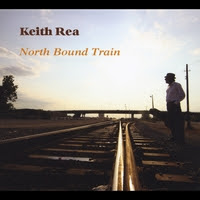 Back on the Houston, Texas roots scene after a lengthy hiatus, Keith Rea returns to the fray with a collection that deserves much attention. With a sound that hovers somewhere between folksy observational story-telling, an old-fashioned country vibe and West Coast singer-songwriter fare, it’s probably best to file him directly in the ‘Texas Troubadour’ box and leave it at that. Of course, that puts him in the company of songwriting greats such as Townes Van Zandt, Guy Clark and Eric Taylor, so I’m sure he wont mind.

He’s a supple writer and musician who seems to coax his songs into existence, and the title track, which incidentally launches the album, is a fine example of his method, and the process of gentle persuasion. I’ve always been a sucker for train songs, and when married to a yearning pedal steel and a lyric that combines frustration, longing, nostalgia, Tennessee and Texas, there’s absolutely nothing not to like. He changes the pace for both “Mister Twelve Bar Blues” and “Honeysuckle Wine”, without sacrificing a jot of his warm, easy style, and on “Back in the Neighborhood” he imports a little Dire Straits-esque guitar magic, and delivers one of the album’s highlights.
www.reverbnation.com/keitharea
Tony S.