Review: Affinitia – These Other Words 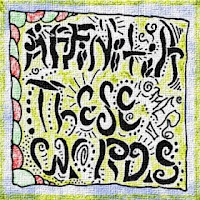 Affinitia is one Tim Urlacher, a Montana based singer-songwriter with a Radiohead obsession and a talent for writing songs that are near impossible to pigeonhole. There’s nothing wrong with that, and “These Other Words” benefits greatly from Urlacher’s askew wordplay, tunes that burrow deep, together with the instrumentation he employs. Though, for the most part, he keeps the arrangements and the music simple and direct (and decidedly lo-fi), it all comes together to make a satisfying whole and an album you’ll want to spent time with.

Obviously that last bit isn’t necessarily true, as taste is subjective and personal, but if you enjoy Mo Tucker solo albums, Bright Eyes, Admiral Fallow and The Curious Hair, then you’re in for a treat. The album commences with the shuffling “To Follow a Lie”, its off-kilter vocals backed by acoustic guitar and makeshift percussion is delightfully oblique, and prepares the ground for “Don't You Know That I Love You?”, which falls apart magnificently somewhere around its middle, but returns invigorated and vital before prematurely expiring. Perhaps the most surprising tracks are the Lennon-esque “Younger” and the haunting, banjo lament “My Stray Bullet”. The former is pristine bedroom pop and one can’t help but feel that John Peel would have been all over it. The latter is even better. Solo strings drowning in echo provide the backing as Urlacher tells his tale. There’s no happy ending to this one.
www.affinitiamusic.com
www.facebook.com/Affinitia
Phil S.