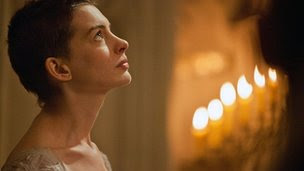 The soundtrack to Tom Hooper's Oscar-nominated Les Miserables has become the first cast recording to top the UK and Ireland album chart in 16 years.

It has knocked Brit-nominated Emeli Sande's best-selling Our Version of Events into second-place with newcomer Jake Bugg's self-titled debut in third.

The last musical to achieve a similar feat was the soundtrack to the film Evita, starring Madonna, in 1997.

Will.I.Am and Britney Spears had the number one single for a second week.

Their track Scream & Shout has held off competition from rapper 50 Cent, whose new release, My Life, featuring Eminem and Maroon 5's Adam Levine, entered the chart at number two.

Also failing to claim the top spot was singer-turned-actor Justin Timberlake with his first single in six years.

There was a flurry of excitement when he released the track Suit and Tie, featuring Jay-Z earlier this week.

The last time Timberlake, who has recently starred in films including The Social Network and Friends with Benefits, had a UK chart hit was as a guest on rap producer Timbaland's Carry Out in April 2010.

He had to settle for number three, with Taylor Swift and Rihanna rounding off the top five.

Also in the album charts, Manchester-based indie rockers Everything Everything - whose debut album Man Alive was Mercury prize-nominated, enjoyed their highest charting album to date as Arc entered at number five.

Other new entries were Irish folkster Villagers whose Awayland charted at sixteen and veterans New Order, whose Lost Sirens - made up of tracks recorded during sessions for their 2005 album Waiting For The Sirens' Call - charted at 23.

Les Miserables's success was not limited to the album chart as actress Anne Hathaway scored her first ever UK Top 40 hit with I Dreamed A Dream, which climbed 58 places to number 22.