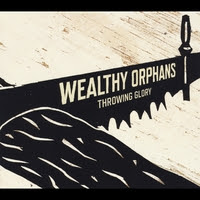 Wealthy Orphans are a four-piece alt-gypsy-folk group from Grand Rapids, Michigan, fronted and led by singer-songwriter and all-round artistic sort, Rick Beerhorst. For those interested in his other creative endeavours, I suggest a visit to the Studio Beerhorst website (link below), where a feast for the eyes awaits your perusal. In fact, should you invest in the physical version of Throwing Glory, you’ll discover artwork deigned by the singer, and based on hand printed images carved into cherry wood. It’s visually striking and utterly arresting, and it’s times like this I particularly mourn the passing of vinyl. Bigger is usually better when it comes to album artwork, and it would have been most definitely in this case.

As for the musical content, there’s just as much to get excited about. Though only seven tracks long, it clocks in at a healthy 36 minutes, as the quartet decline any requirements to rush their songs, instead leaving plenty of room for organic growth. Opening number “Baby Who Have You Been With” builds beautifully, settling aural layers like sedimentary sandstone, before stripping everything back to a simple acoustic strum and Beerhorst’s song of gentle longing and restrained hurt. Accordionist Michael Schaffer adds details, and they finish as they began.

“Broken Dreams” is rooted in the Eastern European gypsy-jazz tradition, via the cafes of Paris and the 70’s Californian beatnik scene that spawned Tom Waits, Rickie Lee Jones and Joni Mitchell’s jazz collaborations. Beerhorst almost part croons the words, and the group propels the music with a reckless glee. Perhaps best of all is “The Young Become the Old”, a song which wouldn’t have sounded out of place on one of the first two or three Scott Walker solo albums. Good and dark, it seeps a Jacques Brel-ian quality that is decidedly enigmatic.
www.wealthyorphans.com
www.studiobeerhorst.com
www.facebook.com/wealthyorphans
Rob F.