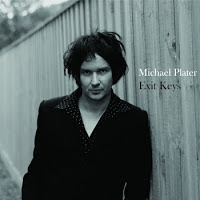 Melbourne based singer-songwriter Michael Plater has regularly been releasing music since his 2004 debut EP “These Mad Windows”. Whether solo or with a band, his sound has usually combined a version of Gothic, Southern alt. country with something quite quirky and antipodean. I suppose Nick Cave is the easiest comparison to make, but the Americana influence is more pronounced and Plater sings with a voice all his own.

“Exit Keys” is a ten-track, full band affair, and might be the best thing he’s ever done. Lead single “Ring Of Smoke” begins with a “Loaded” period Lou Reed / Velvets riff, and continues to chug along in a most satisfying fashion until a spiky guitar solo brings it to a halt. Song titles like “A Curse On This Town”, “One Last Drop Of Poison” and “The Vulgar Tongue” indicate a continued fascination with the darker things in life, and he’s adept at turning these shadowy themes into songs that are hardly pop, but are always strangely accessible and ultimately, very pleasing. Well worth checking out if names like Reed, Cohen, Cave and Waits already feature in your record collection.
www.facebook.com/michaelaplater
www.michaelplater.bandcamp.com
Rob F.