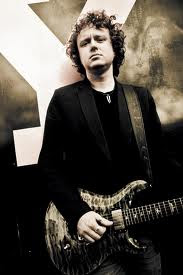 Hifi+ “Ireland has a knack of throwing up diamonds, of which McBride most definitely is one.... this boy’s going places.”

Classic Rock Society “Catch him before he goes mega".

Former Young Guitarist of The Year and now fully-fledged blues-rock virtuoso, Irishman McBride Is at the start of what many industry pundits are predicting will be a glittering career. He has toured with Joe Satriani, and opened in the UK and Ireland for Jeff Beck, Joe Bonamassa and US slide maestro and Grammy nominee Derek Trucks. He played Glastonbury in 2011 and the HRH festival in Ibiza.

A few months after his sixteenth birthday Simon was recruited by the Belfast-based pioneering metal band Sweet Savage, who reformed in 1994 without their founding guitarist, Vivian Campbell (Dio, Def Leppard), who Simon replaced. Simon toured with the band and recorded two albums, Killing Time 1996 and Rune 1998.

Then, after six years touring with fellow Irishman Andrew Strong, who made his name in the 1991 cult film The Commitments, Simon came off the road to pursue the idea of a solo career. In 2008 he released his debut solo album, Rich Man Falling (“Blues Rock Par Excellence” CLASSIC ROCK) and his 2010 follow-up album Since Then has wow’d critics as an even better product.
Posted by Bangs at 11/09/2011 01:02:00 pm