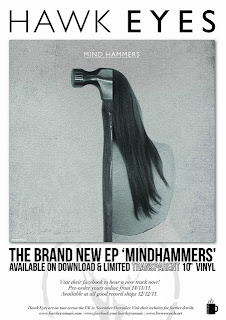 The Mindhammers EP is Hawk Eyes' latest offering. A collection of new material that is positively alive with raucous energy and invention and a taste of what to expect in 2012 when then their new album drops. This is the band's last release on Brew before they move on to their new home of Fierce Panda.

To support the release of the Mindhammers EP, Hawk Eyes will be touring heavily in November with Turbowolf and The James Cleaver Quintet while December a tour supporting Ginger from the Wildheartswill follow after he personally invited the band to join him:
Current November co-headline tour with Turbowolf + The JCQ

"Exploding out of the speaker's on this phenomenal debut, it's immediately apparent that Hawk Eyes are a force to be reckoned with" Kerrang! KKKK

"Hawk Eyes will swoop down and rip out your intestines through your nostrils with this opening track to new album "Modern Bodies" NME, On Repeat