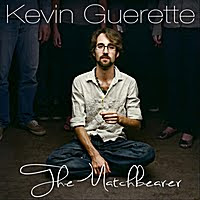 Kevin Guerette - The Matchbearer (Independent)
Kevin Guerette is an ex-student of music, a Spiritualist, a tea drinker and enjoys observing underwater spelunking; though I’m unsure how one observes such a thing, without actually doing it oneself. “The Matchbearer” is his debut release, a seven-track EP with a variety of different styles, from all-out alt. rockers, to literate indie pop songs. It doesn’t hang around too long but there’s much pleasure to be taken from its 21 minutes.

Beginning with the 40 second teaser “Light Fuse A-aaand...”, we’re soon into “Pretty Girl”, a choppy rhythm frames Guerette’s words, a love song of sorts, though quirky rather than saccharine. “Speed of Light” is altogether different; it’s urgent and driving, and either a spiritual call to arms or drug-fuelled enlightenment, or both. “Time Of Day” is pristine, amped up power-pop as is “Stupid Cupid” and the final track “Paper Boats”.

With the fore mentioned “Speed of Light”, “Vent” is my favourite thing here. Its heavy guitars and Guerette’s half sung, half chanted vocal indicate a future filling medium size arenas and semi-retirement as a gentleman farmer. I’m already looking forward to a full-length album.
www.myspace.com/kevinguerette
Rob F.
Posted by Bangs at 11/23/2011 12:06:00 pm