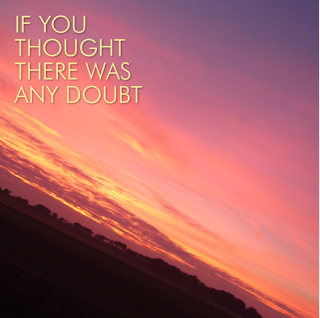 Pinemarten
If You Thought There Was Any Doubt
Album Out Today

“Orchestrating piercing rays of gleaming synths, the anonymous Chesterfield resident pours sophistication and summery elegance.” Abeano
“Writes the type of tracks to put your palms on your jaw, glaze your eyes and clean your brain to.” The Fader
“Forges a wonderful style of dreamy pop music that’s Scandinavian to the touch, all synthetic and breezy.” The Recommender


Today sees the release of Pinemarten's debut album 'If You Thought There Was Any Doubt'. The album is available to buy now via Bandcamp, with a select number of CD albums still available to purchase alongside digital download.

Having built up a reputation online with several lauded EP releases, as well as remixes for the likes of Jewellers, Sun Glitters and Museum of Bellas Artes, ‘If You Thought There Was Any Doubt’ is Pinemarten’s most potent statement of intent yet. Sporting his trademark, bouncing synthesizer riffs throughout, the album strikes a brilliant balance between upbeat pop-laden tunes and laid back romantic gems.

Featuring the recently released 'Don't Let Me Be Denied' and 'Change Your Mind', Chesterfield's native dream pop enigma shows no sign of being deterred by the album format on his debut offering. 'I Want To Show You Loving' is a sheltered pop hit, whilst the likes of 'Breathe' and 'When You're Lying There' show there is a still a lip-curling riff around every corner. At once hopelessly romantic and emotionally resolved, 'If You Thought There Was Any Doubt' belies the youthfulness of its maker and proves to be a gem of unheralded, underground pop.