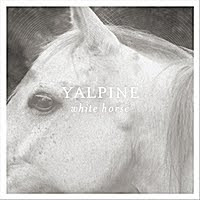 Yalpine - White Horse EP (Independent)
Winner of this year's prestigious Beyond the Music Label Series Finale at San Francisco's 111 Minna Gallery, Yalpine celebrate their victory with the release of their debut EP. The five tracks on “White Horse” indicate a group with interesting influences, from post-punk electronics to Goldfrapp, early Portishead and all with the classic indie-pop instincts of Ladyhawke and Cat Power. Frontwoman Lina Hancock is in possession of a voice that perfectly suits her songs, and its wispy, dreamy tone is complimented by instrumentalists Shawn Scott and Matt Driscoll on synthesizers and guitars.

Opening with the title track, its appeal is instant. The sound is verdant and lush, and begins with waves of electronic sound around an off-kilter beat. It then evolves into jagged funk before settling again. All through Hancock adds gentle coaxing, faraway textures and ultimately emotional tension. It’s quite a performance. They seem to enjoy breaking their songs down into quite separate parts. “Nobody” features a disturbed, almost circus-like section and “In The Sand” has a chorus that could be a distant cousin of Holland-Dozier-Holland’s “You Keep Me Hanging On” – Kim Wilde’s version, funnily enough.

I must say “White Horse” is a thoroughly enjoyable debut collection, though over far too quickly. I hope they get around to a full length record sooner rather than later.
www.facebook.com/Yalpine
Rob F.
Posted by Bangs at 11/16/2011 04:27:00 pm