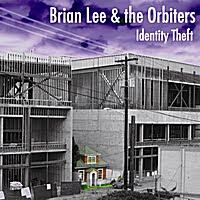 Brian Lee & The Orbiters - Identity Theft (Open Century Music)
Based in Seattle, Brian Lee & The Orbiters are a blues-rock outfit with plenty of heart and soul. Led by Mr. Lee who sings, plays guitar and plenty of harmonica, the band take a basic blues format and add their own unique idiosyncrasies. The result is an album that varies between Clapton-esque virtuosity and first-rate bar room stompers. Both ways are equally appealing.

They ooze confidence. Lee is a veteran of his local scene, a skilled songwriter and an utterly convincing frontman. The Orbiters are all talented, experienced bluesmen who know how make a record swing. From the first track “Fine Line” they hit an immediate groove, the rhythm section of drummer Conrad Ormsby and Hank Yanda on bass driving the song along at fair old lick while Lee shows off his harmonica skills. It’s over all too swiftly, but though the pace changes on “So Lucky”, the quality is retained as guitarist Steve Yonck gets to show what he’s all about.

Third track is the title song, a slow rumination on loss of identity and the impersonal nature of modern society, and was originally inspired by letters sent by banks, and received by Lee, offering credit cards to his deceased father. You’ll struggle to pick up on that particular detail from the song, but you wont fail to spot Yonck’s outstanding guitar contribution. Tracks like “I Smell a Rat” and “What Hit Me” may cover more traditional themes, though both are extremely well done, but just before the end we get “Sideways”, a look at the state of the world, dressed up as a relationship song. It’s not preachy or patronizing, but simply a great little song performed by a band at the top of their game.
www.brianleeorbiters.com
Rob F.
Posted by Bangs at 11/11/2011 08:00:00 am