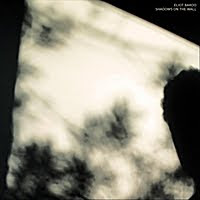 Eliot Bardo - Shadows On The Wall (Last Man Records)
I do like the record company moniker. I get a blurred image of the batsman leaving the pavilion to defend the last wicket, or the loan gunfighter standing firm in the dusty street, the saloon doors behind him. Eliot himself is a bit like the last man, too. He does sound as if he’s alone, without any help from anyone in this big world. On just the second song, "By The Riverside", he’s told us “Nobody really knows you when you got no name... No one gives the man a second look... Do you know me at all... Will you catch me if I fall?...”

His voice is unusual, as he sings a little flat, and has almost a talking drawl at times, but it also has a cracked appeal, in a 'Nikki Sudden' kinda way. It helps that he’s singing all his own words, and the territory he covers is not only familiar to him but also close to his heart… I think. And he goes on to tell us that his life is on the wrong track, and although people offer to help they only care about themselves ("More Enemies"), and the line "I got more enemies than friends" tells us much about his feelings for this world, if only in song. Dour lyrics inhabit almost every breath ("Life Is Beautiful" bucks the trend, though it’s a love song about a girl who looks beautiful when she cries), but their delivery isn’t as downbeat as one might expect, with odd moments of spiky electric guitar, some surging keyboards, and his vocals, with a righteous feel to them, letting us know he can handle it all, that he’ll get by. His best lines are sung in "Trap", introduced by the now trusty combination of clanging guitar and swirling keyboards: “Sitting on the steps of the rest of your life... Waiting for a friend or the rest to arrive... There's no way in... There's no way out”. Such inherent sadness here, deep and desperate thoughts about what the future holds.

He undoubtedly has a world-weary appeal, though he does finish with a song called "Everything Is Going Fine', but if that doesn't work, you’ll have to fall back on that one love song…
www.lastmanrecords.com
Kev A.
Posted by Bangs at 11/25/2011 10:13:00 am