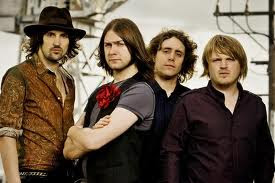 KASABIAN ANNOUNCE AUDIENCE CONTROLLED LIGHTING FOR NEW LIVE SHOW
Should Kasabian bomb at any of their upcoming shows, they might find it hard to find their way off stage, unless they're booed off. The band have announced that the lighting in their stage set has been designed to become lighter or darker depending on how loud the audience is.

Frontman Tom Meighan told The Daily Star: "Serge [Pizzorno, guitarist] and Aitor Throup, who did our album artwork, and a guy called Nick, who's a fucking genius at lighting, came up with it. It's going to look great. The idea the stage will react to fans will be cool. It's never been done".