SONIC YOUTH "ENDING FOR A WHILE"... 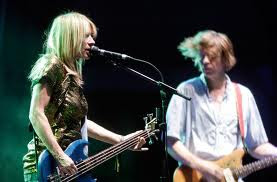 SONIC YOUTH "ENDING FOR A WHILE"
Sonic Youth guitarist Lee Ranaldo has said that he is unsure about the future of the band following the announcement last month that co-founders Thurston Moore and Kim Gordon are to divorce. Speaking to Rolling Stone, he said that the band's recent South American tour dates, which began shortly after Moore and Gordon announced their split, "are certainly the last shows for a while".

Ranaldo told the magazine: "[The news of the divorce is] not as sudden for me as it's been in terms of the press and what not. Actually, the tour went really well. It really didn't affect it all that much. It was a pretty good tour overall. I mean, there was a little bit of tiptoeing around and some different situations with the travelling - you know, they're not sharing a room any more or anything like that. [But] I would say in general the shows went really well. [Though] it kind of remains to be seen at this point what happens to the future. I think they are certainly the last shows for a while and I guess I'd just leave it at that".

He added: "I'm feeling optimistic about the future no matter what happens at this point. I mean, every band runs its course. We've been together way longer than any of us ever imagined would happen and it's been for the most part an incredibly pleasurable ride ... I'm just happy right now to let the future take its course and I guess I'm kind of thankful that I've got this other project that kind of came about on its own. It wasn't kind of like, well, 'Oh the band is ending for a while and I've got to figure out what to do'. It kind of naturally happened in the course of things so that was a nice way for that to come about".