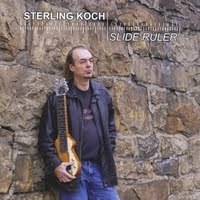 Sterling Koch - Slide Ruler (Full Force Music / High Tone Music Group)
Sterling Koch is a renowned lap steel guitarist, with a rock solid reputation as both a session player and a solo artist. Blues is his chosen genre, and for his latest album he’s recruited a band of heavyweights including bassist Tommy Shannon (Stevie Ray Vaughan, Johnny Winter) and Grammy nominated drummer Chet McCracken (Doobie Brothers). That’s quite a rhythm section, and they hold the groove down in some style, allowing Koch the space to really play.

There are plenty of standout tunes to be found on “Slide Ruler” and in the best blues tradition; Koch delights in playing, and bringing something fresh and vital to the standards of the genre. He’s also not averse to dropping the odd surprise track into a set, and it’s great to hear Santo and Johnny Farina’s 1959 classic “Sleep Walk” get a muscular re-working. Equally impressive is the first single lifted from the album, a strapping version of Dion DiMucci’s “If You Wanna Rock ‘n’ Roll” - I bet it sounds great on the radio. On Roosevelt Sykes’ “Driving Wheel” Koch gets to show off his slide guitar capabilities to full effect and he’s just as good on Johnny Winter’s “I'm A Bluesman”, where he plucks a fine solo. If you were under the illusion that the lap steel guitar was only for playing country music, head over to Koch’s website, or YouTube, and get yourself a rounded musical education.
www.sterlingkoch.com
Rob F.
Posted by Bangs at 11/24/2011 03:18:00 pm