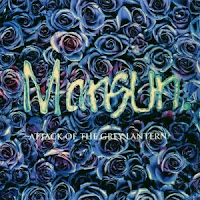 Mansun – Attack Of The Grey Lantern (Parlophone)
With two hit singles under their belt, the slightly annoying “Stripper Vicar” and the truly wonderful “Wide Open Space”, Mansun have made a mighty ambitious debut album. From the John Barry(ish) orchestrated intro into the first track, the wonderful “The Chad Who Loved Me”, it’s obvious that they don’t intend to take any prisoners.

The songs are long; nearly half are over five minutes, but that’s okay because they never cease to be entertaining. We’re not talking about a bunch of snot-nosed punks here, overawed in the studio for the first time; this band demands respect and gets it. Buy this album immediately and in a year’s time you’ll be talking about in the same way Radiohead’s “The Bends” is being talked about now. It’s that good.
LB (1997)

Chuck Prophet – Homemade Blood (Cooking Vinyl)
Ex-Green On Red man Chuck Prophet seems to be enjoying himself on his fourth solo outing, a stomping Stonesy set that packs a whole lot of attitude into its twelve songs.

Although most of the songs are story-based, there’s a real bar room feel to the wonderfully titled “Homemade Blood”. Most of the record falls between the wordiness of Elliott Murphy and the raw gutsy Austin sound of the True Believers. This inspired combination shines through on songs like “You Been Gone” and “Ooh Wee” to fabulous effect.

Put this album on in the car and notice how you drive slightly faster whilst gently nodding your head.
LB (1997)

Sanjay Mishra with Jerry Garcia – Blue Incantation (Rykodisc)
Sanjay Mishra is a classically trained composer and guitarist who was born in India but now lives in the USA. Jerry Garcia needs no introduction from me. The pair met in 1994 and decided to record this mesmerizing album together; a combination of free-form Eastern ambient trances and structured Western rhythms, which all makes for a very pleasant listen. Garcia’s masterful, ethereal guitar weaves in and out of featured tracks, leaving a fitting tribute to the great man.

Both deadheads and chillout kids can buy with complete confidence.
LB (1997)

Maids Of Gravity – The First Second (Vernon Yard)
Produced by John Cale, the Maids Of gravity have recorded an album that harks back to the halcyon days of acid rock. Forget the pop tones of Kula Shaker, this is a record that drips cosmic excess from every pore. Maid’s main man Ed Ruscha has employed everything but the studio sink to make an album that could have been around in 1973, but sounds totally today.

Cale plays piano on the opener “Half Awake”, a glorious riffarama that Lenny Kravitz would weep over, and the album never loses focus. With influences ranging from Quicksilver and the Dead to Krautrock and Hawkwind, there’s plenty here to please those of us long in the tooth, and longer in the hair.
LB (1997)
Posted by Bangs at 11/16/2011 03:40:00 pm