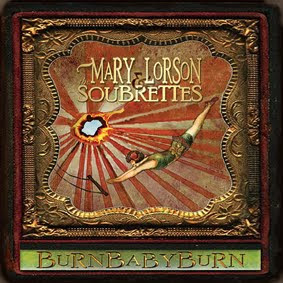 Mary Lorson and the Soubrettes are fronted, not surprisingly, by Mary Lorson (vocals, guitar, keyboards, percussion), who began her career twenty years ago as the lead singer of the noisepop band Madder Rose. Lorson has since steered the jazzy artrock group, Saint Low, scored several films with Billy Coté, and collaborated on numerous dramatic and musical projects. For her latest record, BurnBabyBurn out 6th February on MLS Records, Lorson has dressed her rhythmic guitar and piano-based compositions with subtle banjo and standup bass support, provided by Amelia Sauter (bass, vocals) and Leah Houghtaling (banjo, tenor guitar, vocals).

Soubrettes were hard-working comic actresses of the vaudeville era. The band that bears this moniker is the latest avenue for Lorson’s creative explorations, much of which have been informed by her musical play-in-progress, Freak Baby and the Kill Thought, about vaudeville wild woman, Eva Tanguay. “Tanguay was the first iconic, self-defined, out-of-control American female star. She was to Sarah Bernhart as Janis Joplin was to Helen Hayes; enthralling but dark and kind of crazy. So the music I’m writing for the play is trying to express that visceral intensity in aesthetic terms we can understand today. It’s a challenge.”

Indeed, BurnBabyBurn’s eleven tracks show an eclectic writer and producer at work. Tied together thematically by Lorson’s interest in American culture and attitudes, her arrangements are sober, whimsical, layered, spare, damning and forgiving.

Journalists have hailed Mary Lorson’s voice as an “ever-evolving expressive instrument” and a sound that “lingers in the mind like the smell of a candle which has been blown out.” On BurnBabyBurn, Lorson helms the ship with attitude and authenticity.