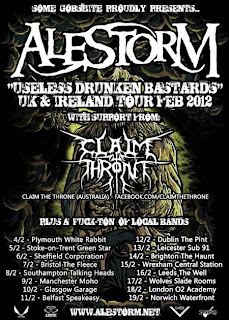 Coming off the heels of their appearance in the Bohemia tent at Sonisphere Knebworth 2011 which was described by those present as one of the highlights of the whole Sonisphere weekend, Scottish pirate metallers Alestorm have announced a UK wide tour to take place in February 2012. The band will be touring in support of their latest album entitled “Back Through Time” which was released earlier in 2011.

"Greetings dudes! In February 2012 we'll be hitting the road for our biggest headlining UK tour EVER, including our first ever shows in Ireland! Along with us will be our Australian buddies Claim The Throne, who are really good at getting drunk. Get your arses down to the show, or we'll kick your ass. I know where you live."

The tour kicks off in Plymouth and zigzags all over the country before finishing up in Norwich’s Waterfront two weeks later. Catch them here: