RADIOHEAD TO RELEASE FROM THE BASEMENT DVD 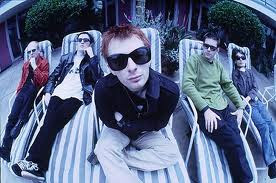 RADIOHEAD TO RELEASE FROM THE BASEMENT DVD
Radiohead have announced plans to release their 'From The Basement' session on DVD this coming December.

Originally filmed for the BBC back in July, the main portion of it comprises the band's performance of their eighth album, 'The King Of Limbs', in its entirety. The overall package also includes live renditions of unreleased tracks 'The Daily Mail' and 'Staircase' and bonus take, 'Supercollider', plus a digital copy of the session and a book of live photographs.

While those who pre-order the DVD at thekingoflimbs.com will receive it in time for Christmas, the rest of us will just have to wait until January 2012, when it'll be available to buy in shops.
Posted by Bangs at 11/21/2011 12:56:00 pm