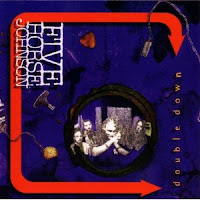 Five Horse Johnson – Double Down (Small Stone)
I don’t know too much about this lot but what I do know I like. They’re a kind of Stonesy mixture of the Feelgoods and something much heavier and most definitely fresher. Guitars and harp clash with some intensity and it’s not too difficult to imagine the band jamming out in some sweaty club in the back-end of nowhere. Songs like “Downstone Blues”, “Shine Eyed”, “Diamond”, “Wash Your Hands” and the title track all do the business and overall it’s a very solid record.

On the downside, they’re not breaking much new ground here and there’s a fairly unnecessary cover of the Pistols’ “Submission” included, but that doesn’t stop them sounding like a great band, who on the right night, in the right town, could blow away the best of ‘em.
LB (1998)

Slade – Feel The Noize: Greatest Hits (Polydor)
Back in the early 1970s, Slade were the first band I fell in love with. T-Rex may have been cooler and Bowie definitely weirder, but what does that matter when you’re seven years old and the only access you’ve got to pop music is Ed Stewart’s Saturday morning show and Top Of The Pops on a Thursday evening.

In those days Slade lived on Top Of The Pops, churning out classic stomp pop singles, one after the other. All the hits are here, 21 top 30 singles including their half dozen number ones, and it all sounds bloody great a quarter century on.

It’s about time Slade received the respect they deserve and it’s great to see this excellent compilation available.
LB (1997)

Neil Hannon has a wonderful gift of bringing late ‘60s classic easy listening pop chic into the ‘90s without making it sound twee or in any way forced. Comparable to Scott Walker or Harry Nilsson in feel, neither sang lyrics as funny as those on “If…”, though the latter came close on a couple of occasions.

“A Short Album About Love” is a genuinely impressive collection and anyone who enjoyed the previous record (“Casanova”) should do themselves a huge service and invest promptly. It comes in a nice box and it’ll make your day.
LB (1997)

Perm – S/T (Northern Assembly Records)
It’s like 1972 all the time in Perm world, except 1972 was never really like this. Things always seem better when you’re looking back on them, that’s the truth, so it’s no surprise that Perm come on like a groovier, heavier Kula Shaker without that band’s particular brand of crassness. There’s a little bit of Lenny Kravitz in their sound, too, but I’m not going to make a big deal about it, because on this five track EP Perm are kicking out the jams, big time.