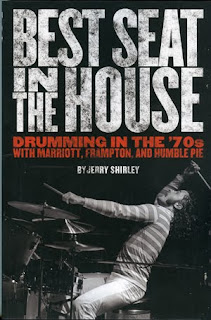 Best Seat In The House

Drumming In The ’70s
With Marriott, Frampton And Humble Pie

Jerry Shirley will be most remembered by anyone with the slightest interest in “Classic Rock Music” as the drummer in one of the late ’60s/early ’70s biggest success stories – Humble Pie.

In early 1969 Steve Marriott and Peter Frampton had both become increasingly tired of the teenybopper status they had gained in The Small Faces and The Herd. To break away from the pop format they teamed together and formed Humble Pie. Jerry Shirley was chosen to drum in the new band. He had just turned 17. Along with bassist Greg Ridley, and managers Andrew Loog Oldham and Dee Anthony, the Pie started a six-year journey that stormed the US and defined Arena Rock – bigger sound, bigger contracts, and bigger parties.
Along the way Jerry meets with future legends that make for a star-studded bio and rare glimpse into the rock music industry. Written in his own voice and with a wicked musician sense of humour, the drummer details the vibrant scene that created the explosive sound of heavy-rock.

He explains how sessions were conducted by iconic engineers like Glyn Johns and Eddie Kramer, describes his session work with Syd Barrett (Pink Floyd) and George Harrison (The Beatles) and tells amusing tales like drum shopping with The Who's Keith Moon. What was it like to perform a sold-out show at Shea Stadium, play for 250,000 in Hyde Park, charter a private jet for tour, record the trend-setting live record at the Fillmore East (that spawned the FM radio staple ‘I Don't Need No Doctor’), get hyped for the stage by Dee Anthony, and deal with the drugs and excesses of this inhibitive era of rock? The answers are all here.

Jerry’s account of his professional and personal relationship with the legendary Steve Marriott is particularly noteworthy, as it’s perhaps the most intimate first-hand look to date at the celebrated singer/ songwriter/guitarist, who died in a house fire in 1991.

For anyone who wants to trace the journey from provincial beat band to Immediate Records and then being catapulted into the hallowed halls of British Rock Royalty at the dawn of the ’70s, this book transplants you back to the very heart (and best seat) of these heady, creative and exciting days.
Posted by Bangs at 11/24/2011 03:08:00 pm