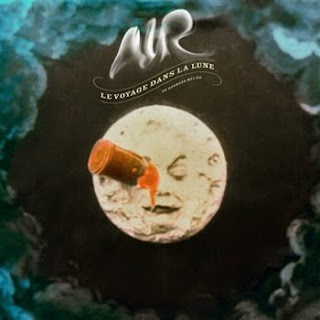 ‘Le voyage dans la lune’ (A Trip To The Moon) is a pioneering black and white silent film from revered director Georges Méliès released in 1902 that is considered one of the most important works in film history. AIR, the duo of Nicolas Godin and Jean-Benoit Dunckel have just confirmed that this classic film is the inspiration behind their new album, also called ‘Le voyage dans la lune’, which will be released by Virgin Records in February 2012.

The 16-minute film was based loosely on Jules Verne’s ‘From the Earth to the Moon’ and HG Wells’ ‘The First Men In The Moon’ and was the first movie to use science fiction as its theme. The colour version was feared lost but in 1999 a fragile copy was found and the fully restored edition debuted at Cannes in May 2011 with a new soundtrack by AIR. Their new album expands the instrumentals from that screening and features the vocal talents and lyrics of Au Revoir Simone and Victoria Legrand (Beach House).

Says Nicolas Godin on the project: “‘A Trip To The Moon’ is undoubtedly more organic than most of our past projects. We wanted it to sound ‘handmade’, ‘knocked together’, a bit like Méliès’ special effects. Everything is played live…like Méliès’ film, our soundtrack is nourished by living art.”

The three producers of the restored version have agreed to let Virgin release a special limited editoin version of AIR’s album ‘Le voyage dans la lune’. This will consist of the album plus a bonus DVD or digital download of the restored colorised film with AIR’s original film score, strictly limited to 70,000 global copies.

A special three minute extract of the film will be made available for free for one week only on iTunes on December 5, at which time the AIR album pre-order will start.
Posted by Bangs at 11/24/2011 09:11:00 am