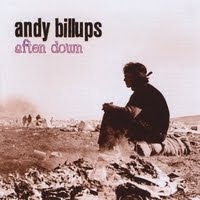 Andy Billups - Afton Down (Independent)
Andy Billups is the bass player in The Hamsters (fans will know him as Ms. Zsa Zsa Poltergeist), and “Afton Down” is his debut solo record. I’m happy to admit I had certain expectations when the album arrived in the post, all of which were dashed almost immediately. Known primarily as a blues-rocker, for this collection Billups has utilized a completely different approach. Inspired by the location of the 1970 Isle Of Wight Festival, and in particular by a Bob Aylott photograph (entitled “Afton Belle”) depicting a heavily pregnant hippie girl standing amongst a sea of tents on the site’s Desolation Row, Billups has crafted a record with folk and almost ambient elements, as well as rockier outcrops.

Billups is no singer, and he begins his album with two instrumental pieces, both featuring nothing more than keyboards and programming, and the tracks set the scene with a craggy, rural ambience. It’s a soundtrack for walking on windswept hillsides and uncultivated fields of grass and stone. Apart from a later instrumental piece, the remarkable seven-minute “The Short Score”, three vocalists have been drafted in to give voice to Billups’ words. Ray Brown gets the majority of the songs, and the best of them, “Afton Belle” retains the atmosphere of the earlier instrumentals. My favourite of the trio, Bethan Waters, best nails the folkier aspects of the material and the musicians respond accordingly. Try and hear “Straight Arrow”, in particular.

With The Hamsters giving advance warning of their retirement in 2012, it’ll be interesting to see if Billups can go on and carve out a career as a solo artist. I hope he gives it a go, because as “Afton Down” indicates, not only is he a fine musician, but he’s also not short of ideas. That’s definitely a talent worth cultivating.
www.andybillups.com
Rob F.
Posted by Bangs at 11/23/2011 01:07:00 pm