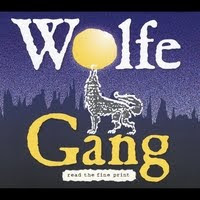 The Wolfe Gang - Read The Fine Print (Independent)
The Wolfe Gang, led by singer-guitarist Michael Wolfe, play lively and loose R&B with a distinct Louisiana feel. Their debut set includes both original material and a variety of eclectic covers, all of which are arranged and presented in a consistent style. There aren’t too many bands who’d put versions of Kurt Weill’s “Mac The Knife” and Bob Marley’s “Three Little Birds” on the same record, and fewer still who’d get away with it so convincingly.

They describe their style as “organic free-range music” which probably means just about anything you want it to, but if you think of a combination of country, blues and soul with a little Zydeco on the side, you’ll be in the right ballpark. Take Lowell George out of Little Feat and put Doug Kershaw front and centre instead, and you’ll be getting warmer, still.

I’ve mentioned a couple of their cover tunes, but their own songs are just as good. The title track hits its groove straight off the bat, and it’s coloured by Jon Tucker’s saxophone blasts and the sort of backing vocalists the Stones used to employ in the early ‘70s. “First To Go” is a high-tempo showstopper with Wolfe’s guitar working with and around the saxophone and “Another Sunday Morning” shows they can take their foot off the peddle and calm it down without losing their way.
www.reverbnation.com/thewolfegang
Rob F.
Posted by Bangs at 11/17/2011 08:36:00 am