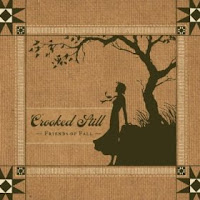 Crooked Still - Friends Of Fall (Signature Sounds)
You might not believe it, but the following paragraph IS TRUE, written as I listened to “Friends Of Fall” for the very first time:

Right from the get-go, I get the impression that Crooked Still have released this to test the waters, and in more ways than one. I think they wanted to know how they sounded on record, and if there’d be any market for their songs. Sure, I could be wrong, they may well be tried and tested marketeers with oodles of experience, who hit on the idea that sounding so young, fresh and immediate might be the way to go. I'll just check the promo sheet that accompanies the EP… ha! What do I know! The joke’s on me! This EP celebrates their ten-year anniversary! I've never heard of them, or any of their music before now. I chose to review “Friends Of Fall” after hearing a few samples that appeared to have such a mix of styles and a rush of energetic divergence – on that considerable evidence, it was a 'must review'.

I never found the time to investigate any further (I just made a note about the 'mix of styles' and then forgot about it), so when it arrived it was totally new to me. All I can say, in my defence, is you ought to try it, and see if you agree that even daisies are put to shame by such a fresh approach. Ten years in the business, and this five piece folk band from Boston, Massachusetts, are as lively as a bunch of newborn lambs, and they gambol along just as freely, albeit for too short a time.

This mixed bag of covers (a Beatles and a Paul Simon), traditional songs, one of their own compositions, and a poem put to their own music could hardly be more diverse, but it suits their style, and their musical savvy. I should have known they knew exactly what they were doing, that they had plenty of experience to cope with the variety. The string instruments melt together in a sweet, harmonic haze, and the vocals of Aoife O'Donovan are almost beyond complimenting, as they’re the perfect voice for this bundle of songs. This is a short but pure treasure. Indulge yourself.
www.crookedstill.com
Kev A.
Posted by Bangs at 11/25/2011 08:56:00 am