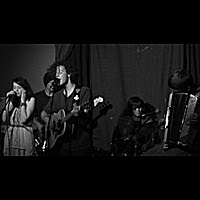 Benjamin Woods - Moon Window (Independent)
Benjamin Woods is a young singer-songwriter from Vancouver, and “Moon Window” is his debut album. Recorded at the beginning of 2011 with various brothers and gypsy friends, its exuberant indie-folk songs and enthusiastic upbeat tone will surely strike a chord with fans of Arcade Fire and the bands they’ve inspired, as well as late period Tom Waits and even Tim Buckley. Woods has a great voice, a little quirky and affected, but in a good way and his songs force the listener to pay full and proper attention.

The range of instruments his band play add plenty of variety to Woods’ songs, so we get Teryl Jackson’s haunting flute, particularly effective on “Manzanita” and contrasting sweetly with a heavily strummed acoustic guitar. The ten-minute title track starts slow and simple, as if pacing itself for the journey ahead, but gets considerably more active as the minutes tick by, and by the time assorted strings, piano and farm tools have joined the party, Woods is bawling like a man possessed. It’s possibly the best thing here, it’s certainly has epic qualities, though the fantastic pop writing of “Patient Baby (Hard Just Too)” is just as impressive. Indeed, if quantum mechanics and parallel universe theories are to be accepted, it’s almost inevitable that it’s a hit someplace, in some undiscovered alternate dimension.
www.benjaminwoods.ca
Rob F.
Posted by Bangs at 11/19/2011 11:55:00 am