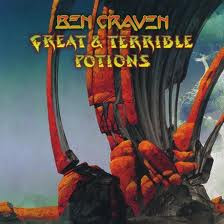 Ben Craven - Great and Terrible Potions (JFK)
Was it all for nothing then? Forty years after punk rock’s famous victory over bombast the p-word is everywhere, strutting around without a hint of shame. No more hiding in the shadows it seems for the likes of Anathema, Pineapple Thief, and Porcupine Tree, who now trade their wares on the open market and celebrate their strange inclination towards Pink Floyd, Gentle Giant and Emerson Lake and Palmer without fear of prosecution. Rumours abound that the estimable Danny Baker is telling people it’s okay to like Yes after all. And maybe he’s not wrong. Speaking as someone who grew up in the thick of Prog and rejected it wholesale I have to confess that years on I’m astonished to find that there’s something weirdly compelling about the luscious melodies, infectious tunes and challenging signature changes of the genre’s highest output (‘Close to the Edge’ for example)’. More than a guilty pleasure, it’s beginning to seem that there was a golden egg in there after all.

You can bet that Ben Craven thinks so; his entirely self-made ‘Great and Terrible Potions’ leaves no ‘progressive’ stone unturned, and cloaks itself in a left-over Roger Dean sleeve to ram the point home. Kicking off with an unabashed Tubular Bells-plundering intro he launches into a full-blown electronic symphony in which the guitar sounds of Messrs Gilmour, Howe and Hackett predominate, bolstered by the inevitable synth swells and noodles associated with their various outfits, and a sprinkling of the Bo Hanson is added for good measure. If you go for this stuff it’s a creditable and enjoyable melange, arguably a little too smooth in parts; but at its best, as on ‘No Specific Harm’, it treads similar terrain to the hugely successful Dream Theatre, which is no bad thing at all.
www.bencraven.com
Neil B.
Posted by Bangs at 11/19/2011 10:40:00 am