Review: Ike Moriz - All Around The World 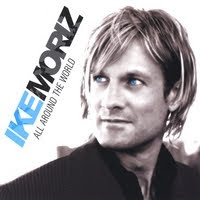 Ike Moriz - All Around The World (Mosquito Records London)
With the exception of this year’s “Breathing Dreams” Ike Moriz’ recent album releases have been easy listening affairs, as he’s made a name for himself as a gifted interpreter of the Great American Songbook. 2007’s “All Around The World” appears to be a precursor to “Breathing Dreams” and showcases Moriz’ songwriting is a contemporary setting, and incidentally betrays a welcome appreciation of British pop and rock from the ‘70s to now.

Bowie, Suede, Felt and Neil Hannon emerge as influences, though Moriz is very much his own man and his songs (and tunes) stand up to comparison. It helps considerably that he has a voice that sounds like no-one else, and there’s a sophistication to the recording which strips away any hint of indie budgetary constraints. Moriz sounds like a star and “All Around The World” drips pop glam.

The album begins with “Whereof One Cannot Speak”, written by guitarist Jim Barnes (The Darkness), it sets the scene with a planet-worrying bass rhythm, an ambitious arrangement and a lyric that mentions Sartre. “All Your Heroes Are Dead” is much subtler and spacier, though just as grand, and features a hook that in a fair world would guarantee abundant daytime radio play. “Killing Games” repeats the trick and “Anything You Want” confirms Moriz’ ear for a classic melody. A top album, and thoroughly recommended to those who enjoy huge pop arrangements and songs with giant gold hooks.
www.ikemoriz.com
Rob F.
Posted by Bangs at 11/11/2011 07:55:00 am