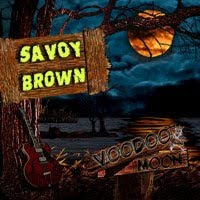 Savoy Brown - Voodoo Moon (Ruf Records)
It would be harsh to suggest that Ruf have retrieved Savoy Brown from the ‘Where Are They Now’ file, but ‘Voodoo Moon’, their first outing for the enterprising German imprint, should serve to reintroduce the band to many who remember them mainly from 1969’s ‘Train to Nowhere’.

Always a wildly fluctuating line-up, the current incarnation finds original guitarist and long-term brand-holder Kim Simmonds fronting a collection of younger musicians assembled from in and around his current base of Oswego, New York. The results, it has to be said, are surprisingly satisfactory. The playing is assured, the songs are convincing and the production is both accessible and mature. Vocalist Joe Whiting deploys his smooth (but not syrupy) Robert Cray-esque voice effectively on the new numbers, several of which were co-written by himself with Simmonds; while the axe-man delivers his licks and lines with all due regard to his long experience. There are highlights: ‘Shockwaves’, ‘Natural Man’ and particularly ‘Look at the Sun’ still stand out from the rest after several hearings; but all in all the whole stands as an enjoyable and welcome return.
www.rufrecords.de
www.savoybrown.com
Neil B.
Posted by Bangs at 11/25/2011 11:06:00 am