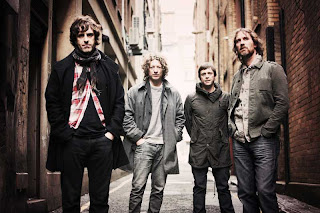 15 years after the release of their million-selling debut ‘All Change’, Cast will release their new album ‘Troubled Times’ on 20 February 2012. The album includes lead single “See That Girl”, which will be released on 19 Dec, 2011.

Originally formed in 1992 from the ashes of two of the most legendary and lauded guitar bands of the time, The La’s and Shack, Cast released four albums (three of them top 10), and had ten top 10 singles ,The second album also went platinum

During that time, Noel Gallagher described watching the band as “a religious experience”, and at release ‘All Change’ was the highest biggest selling album of all time for Polydor. After the band’s split, Power released three solo albums, and has played intermittently since 2005 with the reformed La’s.

A decade later, and the original line-up of John Power (guitar/ vocals), Liam ‘Skin’ Tyson (lead guitar), Pete Wilkinson (bass) and Keith O’Neill (drums) have reunited with original producer John Leckie (Stone Roses, Radiohead, The Fall) for ‘Troubled Times’. The reinvigorated band have produced an album full of the anthemic, melodic and beautifully written songs for which they have always been loved by their fervent fanbase.

John Power says of the reformation:

"Getting back with the band and working with John Leckie again after all these years apart was just how I envisioned it when I started writing the songs for this album. Then it was all about putting into words what it was I was feeling, about all the things I was seeing all around me and troubled times is what we found"


The release will be preceded by a handful of show this December, followed by a full UK tour in early 2012.

05. Not Afraid Of The World