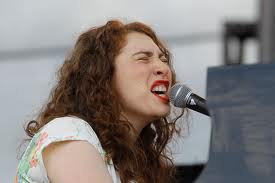 REGINA SPEKTOR PREPS NEW ALBUM
Regina Spektor has shed a little light on what will represent her sixth studio album to date. Slated for a tentative release in spring 2012, it's set to bear the title 'What We Saw From The Cheap Seats'. She revealed in a Facebook post that she's been recording with Mike Elizondo, primarily a hip hop and pop producer, who also worked on Spektor's last long player 'Far'.

The message reads: "Hi! So! I'm very excited to say that this summer I recorded a new record with Mike Elizondo in LA land! It's been finished for a little while but I had no idea when it would be out in the world until now... We're trying to get everything ready for it to come out in May (but I will share some stuff before then for sure!)"